So Day 6 saw a relaxing of wind and relative slowing of the fleet.  Folks are still moving though, just not as fast as before.  Racers are reporting a welcomed poking out of the sun and lightening of the wind.  Happier solar panels.  Power is a very good thing.  The suicidal squid and flying fish are beginning to make their appearances.  The tropics are nearing…

Some are contemplating their proximity to that Pacific high.  Kyntanna continues her northward surge, reporting that one of her considerations is staying high to keep the windvane from accidentally jibing the boat.  Her boat sails without a spinnaker.  Others are getting some use of their spinnies.  Riff Rider continues to stay south and stay moving, as does Double Espresso, who though slowed, is still moving respectably in the 6 kt range and has moved into the lead for arriving first. Nightmare and Passages are also moving well in the lighter air and have overtaken a few positions on elapsed time.  The comfort clump continues to comfort each other, each not straying too far.  Morning Star continues to protect  the eastern front.  The beginning of the fleet will soon reach half way.  Smooth sailing from there on out? Well, the weather could get interesting following this lull.  We’ll check in on that soon.

Today saw the windy reach transitioning into “crossing the ridge” for the bulk of the fleet – this means winds much further aft, and lightening up as they move out of the wide California Coastal flow, aka Gale Alley, into the edge of the Eastern Pacific High pressure zone and their “slot car” paths.

Our intrepid are reporting relaxing, eating full meals, and likely beginning to enjoy the sailing. That is, as long as they are not fretting too much about what may lie ahead. Remember that heretofore behaving Pacific High? Well, even the good kids act out occasionally and the forecast is showing this High maybe just can’t resist messing with our guys and gal.

The current long, not well formed, High is forecast to tighten up a bit in the next couple of days, and as it does this, it will extend a ridge from north to south down into the path of the fleet. We’ve seen some of the fleet likely reacting to this projection, including Riff Rider who has dipped more south, as well, Double Espresso. Others in the fleet, however, seem to have veered north, or west, Crinan II, JouJou, Passages, Nightmare.  Overall, this year’s fleet is tracking a more northerly route than past races, flirting with the edge of that ridge, including the boats in the “clump of comfort”: Fugu, Iris, Jacqueline, Owl, Dolphin, Crazy Rythym, and Dark Horse.  Kyntanna has sailed over west to join that party, leaving Morning Star still as the easternmost boat.

We’ll see in about 36-48 hours what effect the lighter winds have. Some may be able to get in front of the ridge, some may end up in it.  Distance traveled is always a trade off with the speed traveled over that distance.

As our sailors are easing into the windy reach, the windy is easing in to boat parts and doing away with the weakest of links. Boom Vangs, autopilots, wayward halyards, traveler cars, mainsail tears have all been reported. If your parts make it through this phase, well, hopefully, that means they’ll last you the whole trip. We can think that way, anyhow.

Most racers are reporting warmer weather and water now, and the wind starting to clock a little aft. We have seen a juxtaposition of leader boats with the sport boats doing their stuff in the conditions they were made for: Double Espresso and Passages, two Olson 30s, the boat of choice for this race, surfed up from behind to overtake the Capo 30 JouJou and join in the lead with Riff Rider and Crinan II, in elapsed time. Standings with corrected time are much different, and with so much runway left, it is still anyone’s race, well, almost anyone.

Wind is still projected to hold and a southerly surge reprise forecasted for this weekend should land far enough east of the fleet not to be a factor in slowing anyone down. Several days out, tropical low pressure systems off Mexico might disrupt some of the usual tradewind flow, so we’ll be keeping an eye on those weather systems. The dreaded Pacific High has so far been behaving itself, and staying well to the North.  Great luck for these 2018 racers.

Day 3 found our racers gearing up for a wild ride on what’s known as “the windy reach.”  The back of the fleet crawled out of the southerly surge and the front of the fleet grew with the faster, sportier boats, previously becalmed, closing the gap on the original three leaders in reported 25-30 kt winds.  JouJou is still splitting the difference between Riff Rider to the north and Crinan II to the south.  It will be interesting to see the effect of latitude.  Double Espresso is one of those surfing machines now caught up to the three leaders with Nightmare and Passages very close behind. Rainbow, the sole multihull, is holding his own and Kyntanna is throwing her size around surging to the south.  The remainder are roughly clustered together, but still moving at a clip.  We have reports of sea sickness, astronaut eating, and only a little carnage so far, a boom vang and a couple of autopilots, not too bad overall. The sailors are settling in to sailing, as the winds continue.

Sunday saw a thinning of sorts.  Riff Rider, who went West with very little southing picked up the synoptic breeze first and largely escaped what would become the slow zone.  Fast on his stern were JouJou, and Crinan II, who, both a little more south, managed to mostly escape the southerly surge and with over ground speeds from 7 – 11 kts, the three surged ahead of those less fortunate.

Meanwhile, LIBRA, delayed due to autopilot issues, decided to drop out and the sea had it’s way with Mouton Noir and Elizabeth Ann, who both retired to the shores with equipment issues.  We are down to 16.

The rest of this sixteen not rocketing in the synoptics, doddled about in that southerly surge, napping, cursing, trading grey poupon, reflecting on strategy, napping again, cursing again, waiting…

As the night fell, mother nature took pity on them and reached her fingers down to tickle the boats, one by one, and poked each in the direction of the finish.  The breeze started picking up, as did speed, and boat by boat, the fleet started moving past the surge into solid northwesterlies.  Right now it looks like good breeze all the way.  Will it hold?

00:15 Sunday 6/24  – So it looks like the southerly surge that weather gurus were worried about has hit the fleet, with tracking report speeds dropping to 1kt and less.  In the weather briefing provided by Skip Allan, at the skippers meeting, our fearless 19 were warned of this impending doom.  Go west, he said.  Here’s a quick why.  So there is a Pacific high way offshore.  There is a lower pressure system sitting over the central valley of California. Beyond the low pressure system are the Sierra Mountains.  In the upper atmosphere, air can get pushed towards these mountains and some can’t get over them, it cools off, then wants to sink.  As a result of this sinking air, a north/south troph associated with the low pressure system (actually, sitting between the low pressure system and the Pacific High) is pushed back westward off the coast.  Exactly when this would happen, and exactly how far west was unclear.  Light southerly wind lies to the east of the troph, light northerly winds occur to the west, and no winds in the middle.  Guess where our buglighters are.  🙁  The no winds in the middle could last for a couple of days, so we’ll see.  Stay tuned.

At this time Libra is still in port, and Mouton Noir is returning to shore, reportedly possibly due to some equipment issues.  There may be additional news from check ins, we’ll post any updates.  Have a good night, and know the racers will likely at least have a peaceful night too, if they relax and enjoy the calm.  It is lovely out there when it is calm.

John Colby appears cool, calm and collected on his Hylas 42. 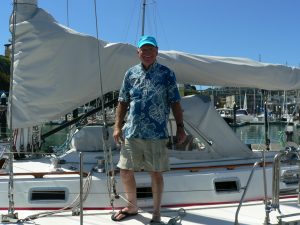 John Colby and his Hylas 42 is currently sailing off the Oregon Coast enroute to the start of the 2018 Singlehanded Transpacific Yacht Race. Will arrive in Brisbane Marina next to the Kahuna’s Red Sky.