At least one racer can attest to that rainbow so far.  Double Espresso made it into Hanalei bay just about at sunrise, in time to see there really are rainbows.  Passages and Nightmare are due in later this evening and tonight.  Crinan II, despite reporting a series of issues and a lack of functioning AP, is still holding his own and will follow.  Rainbow has been silently creeping up on others who are contending with some issue or another and is now on pace to be the fifth finisher.  Riff Rider, Fugu, and JouJou (the others) have all reported power issues or AP issues and so are sailing much more conservatively.

Taking the opportunity to gain some ground is Dark Horse, who may actually pass some of the former leaders. The comfort clump is still rocketing along, all be it with a little bit less wind, and a lot more sun, and eastern Morning Star is still keeping pace.  He could get a boost in wind from the front of the tropical depression remnants.  He should be far enough ahead as to not get stuck in the dead wind behind it.  Looking forward to more arrivals and the official beginning of Tree Time – let the Mai Tais flow!!

Sunday saw a thinning of sorts.  Riff Rider, who went West with very little southing picked up the synoptic breeze first and largely escaped what would become the slow zone.  Fast on his stern were JouJou, and Crinan II, who, both a little more south, managed to mostly escape the southerly surge and with over ground speeds from 7 – 11 kts, the three surged ahead of those less fortunate.

Meanwhile, LIBRA, delayed due to autopilot issues, decided to drop out and the sea had it’s way with Mouton Noir and Elizabeth Ann, who both retired to the shores with equipment issues.  We are down to 16.

The rest of this sixteen not rocketing in the synoptics, doddled about in that southerly surge, napping, cursing, trading grey poupon, reflecting on strategy, napping again, cursing again, waiting…

As the night fell, mother nature took pity on them and reached her fingers down to tickle the boats, one by one, and poked each in the direction of the finish.  The breeze started picking up, as did speed, and boat by boat, the fleet started moving past the surge into solid northwesterlies.  Right now it looks like good breeze all the way.  Will it hold?

LIBRA – After Repairing his autopilot overnight, Gregory has elected not to restart his race this year. LIBRA is at her slip in Sausalito.

MOUTON NOIR – Michael has returned to port with a broken comms computer and water ingress into the forward compartment. Hopefully, Michael & Susan will join us in Kauai.

ELIZABETH ANN – Reported as retired and heading for Bodega Bay. He’s still on the tracker; Gary appears to have decided to ride the southerly winds north toward home.

00:15 Sunday 6/24  – So it looks like the southerly surge that weather gurus were worried about has hit the fleet, with tracking report speeds dropping to 1kt and less.  In the weather briefing provided by Skip Allan, at the skippers meeting, our fearless 19 were warned of this impending doom.  Go west, he said.  Here’s a quick why.  So there is a Pacific high way offshore.  There is a lower pressure system sitting over the central valley of California. Beyond the low pressure system are the Sierra Mountains.  In the upper atmosphere, air can get pushed towards these mountains and some can’t get over them, it cools off, then wants to sink.  As a result of this sinking air, a north/south troph associated with the low pressure system (actually, sitting between the low pressure system and the Pacific High) is pushed back westward off the coast.  Exactly when this would happen, and exactly how far west was unclear.  Light southerly wind lies to the east of the troph, light northerly winds occur to the west, and no winds in the middle.  Guess where our buglighters are.  🙁  The no winds in the middle could last for a couple of days, so we’ll see.  Stay tuned.

At this time Libra is still in port, and Mouton Noir is returning to shore, reportedly possibly due to some equipment issues.  There may be additional news from check ins, we’ll post any updates.  Have a good night, and know the racers will likely at least have a peaceful night too, if they relax and enjoy the calm.  It is lovely out there when it is calm.

Third time to Hanalei Bay for Gary and Elizabeth Ann 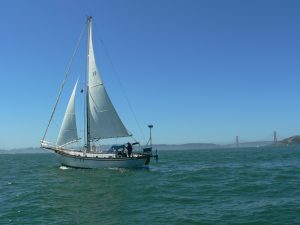 Biding their time before the start of the race