Keeping the bow down

Considering that we have light winds now and that the boat is mostly flat (rolling though), that the wind is supposed to pick up and I don’t want to have to drive, I opted to put the generator back to work. Both batteries were down to just above 25%.  It sits neatly over my head in this picture 🙂
Just now a light drizzle …
rcvd 6/29 13:10 PDT
I knew I had a slow day but … I’m setting more achievable goals, like skipper with most racer updates, or fastest Belgian skipper in the SHTP ever …
I know I have friends and family’s eyes on me and all I can say is I hope the wind picks up. When it’s too light for what I carry it sets up a bunch of negative feedback loops that keep the boat slow. There’s this threshold where everything lights up and we didn’t see it for the most part yesterday. A dollup of 20+ kts wind with your morning race report? Yes please!
rcvd 6/30 11:00 am PDT
Good afternoon from Double Espresso,
The temperature is rising and the sky is still overcast. Yesterday came with winds too light for my sailplan and I got crushed 40 miles by almost everyone. I knew it had been a poor day; when the official position report came in … it was a wake up call. This is all because I don’t have experience with spinnakers in a sea state. Sailing in flat seas is one thing but here the boat changes course 30 degrees in a split second. During my preparation this never came up. In fact I only realized this shortcoming during the race to the Farallon Islands. Most everybody spoke of keeping the spinnaker up in strong breeze but that’s only secondary to putting it up in light breeze in the first place, in a rolling sea, to keep speed up. Maybe it was obvious and I just missed it. Oh well …
I’ll go do some breathing to flush the disappointment out and look forward. We probably have another 4-5 days to Hanalei. The wind is supposed to pick up so I need to focus on not breaking anything if that materializes.
PJ
rcvd 6/30 15:45 PDT

On the seventh day it has been said that one must rest.  Hmmm, maybe not so much for these racers.  The slower one goes in lighter winds, the more one actually must work to make the boat move.  These folks are still lucky though, despite slow speeds, they appear to still have some speed.  If the high had sunk further south, like in some prior years, 4 kts would be celebrated with much glee.  We have reports that the front five maybe did rest briefly upon their visit to the halfway barge and my understanding is that they were well rewarded with Starbucks and ice cream…er, at least maybe jerky and something to read, perhaps a picture of a coffee, wink, wink?  Halfway boxes are all the way fun.

Well, only 1000 miles and change to go…. 🙂  Now well in the lead to finish first, Double Espresso has maybe had some triple espresso.  He complains of being slow, but if the tracking is correct, he’s a fair bit ahead.  Speaking of going, things may be going a lot more quickly in the coming days if the winds strengthen as forecast.  Our leaders will likely reap the benefits.  The comfort clump may even get the advantage first and catch up.  Let’s hope our northwest flyer, Kyntanna, sees it too.

So Day 6 saw a relaxing of wind and relative slowing of the fleet.  Folks are still moving though, just not as fast as before.  Racers are reporting a welcomed poking out of the sun and lightening of the wind.  Happier solar panels.  Power is a very good thing.  The suicidal squid and flying fish are beginning to make their appearances.  The tropics are nearing…

Some are contemplating their proximity to that Pacific high.  Kyntanna continues her northward surge, reporting that one of her considerations is staying high to keep the windvane from accidentally jibing the boat.  Her boat sails without a spinnaker.  Others are getting some use of their spinnies.  Riff Rider continues to stay south and stay moving, as does Double Espresso, who though slowed, is still moving respectably in the 6 kt range and has moved into the lead for arriving first. Nightmare and Passages are also moving well in the lighter air and have overtaken a few positions on elapsed time.  The comfort clump continues to comfort each other, each not straying too far.  Morning Star continues to protect  the eastern front.  The beginning of the fleet will soon reach half way.  Smooth sailing from there on out? Well, the weather could get interesting following this lull.  We’ll check in on that soon.

I’ll be short and to the point today.
My plan was to wait for the wind to veer to jibe but realized the barometric pressure kept rising and was just 1-2 mbar to the center. I decided to jibe early, around midnight. Everything went South and for about 2 hours I worked to fix the mess, 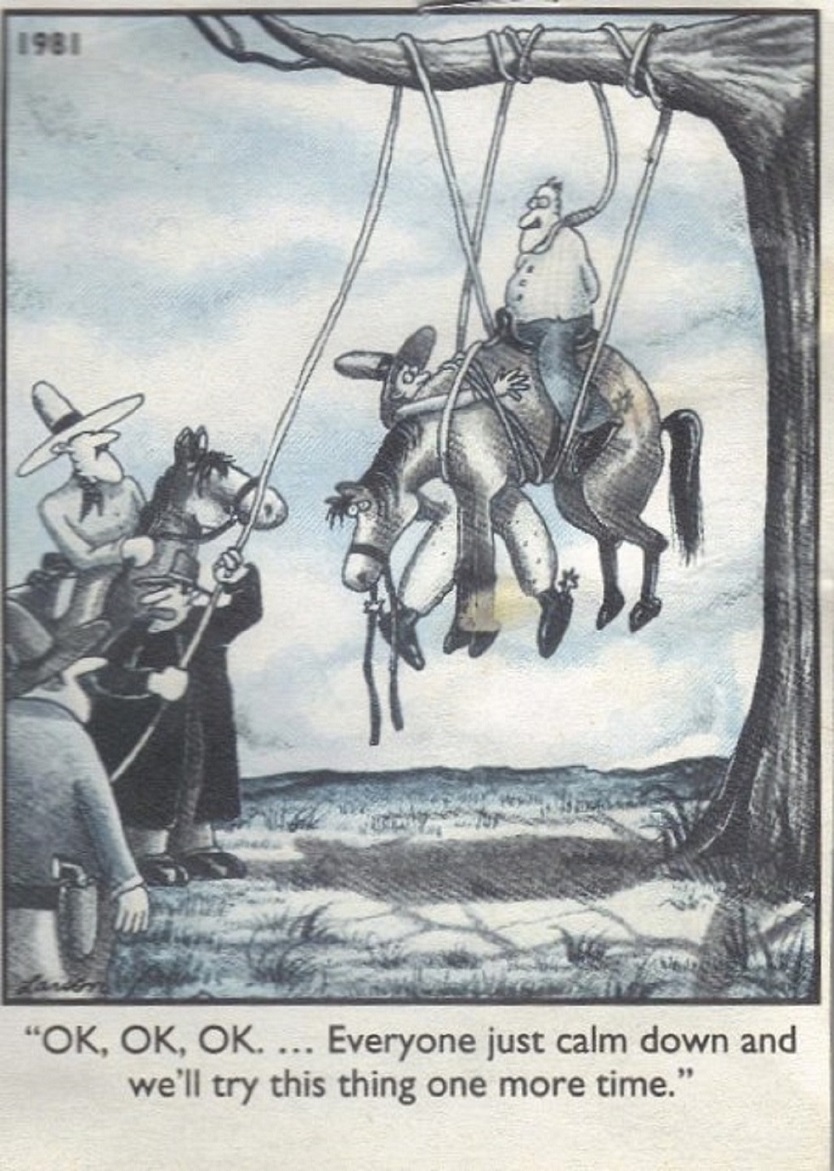 a lot of bow work primarily but constantly running aft and forward, port to starboard, all the while clipped on. I’m a little tired. We’re moving slowly; it looks like everyone is. I’m eating, drinking, working the boat, communicating and not finding much sleep, not for lack of trying.

One little squid landed on the stern and sprayed ink all over. I saw a flying fish and checked the keel and rudder again. All clear and I wouldn’t mind a bath. It’s good I’m alone here! And that’s it for now. Let’s check the forecast.

Thank you to Sled Dog for the cartoon

Today saw the windy reach transitioning into “crossing the ridge” for the bulk of the fleet – this means winds much further aft, and lightening up as they move out of the wide California Coastal flow, aka Gale Alley, into the edge of the Eastern Pacific High pressure zone and their “slot car” paths.

Our intrepid are reporting relaxing, eating full meals, and likely beginning to enjoy the sailing. That is, as long as they are not fretting too much about what may lie ahead. Remember that heretofore behaving Pacific High? Well, even the good kids act out occasionally and the forecast is showing this High maybe just can’t resist messing with our guys and gal.

The current long, not well formed, High is forecast to tighten up a bit in the next couple of days, and as it does this, it will extend a ridge from north to south down into the path of the fleet. We’ve seen some of the fleet likely reacting to this projection, including Riff Rider who has dipped more south, as well, Double Espresso. Others in the fleet, however, seem to have veered north, or west, Crinan II, JouJou, Passages, Nightmare.  Overall, this year’s fleet is tracking a more northerly route than past races, flirting with the edge of that ridge, including the boats in the “clump of comfort”: Fugu, Iris, Jacqueline, Owl, Dolphin, Crazy Rythym, and Dark Horse.  Kyntanna has sailed over west to join that party, leaving Morning Star still as the easternmost boat.

We’ll see in about 36-48 hours what effect the lighter winds have. Some may be able to get in front of the ridge, some may end up in it.  Distance traveled is always a trade off with the speed traveled over that distance.

In no particular order here are a few of the things that happened today.
I discovered that one of the solar panels’ fuse had tripped. I may not have to use the generator again if only the sun could peak through. I am managing energy as frugally as reasonable.
The radar reflector cut through one of his lanyard and is hanging lose. I don’t know that I will be able to fix that; it’s too risky. I thought I had done a good job of protecting them against chafe.
Speaking of chafe I’ve put the millionaire’s tape to good use today to protect some of the lines pushing on the lifelines.
I saw a few birds, one flying fish and plastic debris. I used the GoPro on a stick to check the keel and rudder and they were clear. I know I had pickup stuff because the first night I saw seaweed dragging from the stern. But nothing now. I’ll check again tomorrow.
Here’s a picture. Think of a caption or don’t, whatever, just know I’m having my first true meal: mushroom risotto. Good stuff!

Now that you thought of a caption … And at the request of you don’t know who … Know that my royal derrière was aired today for a fresh delivery, nothing like sitting in the cockpit of a small boat that’s rolling under a cruising rig to work your core. I know TMI again ….
It was light wind today, “petite vitesse” after a fast night. Maybe we’re in for one more. I still don’t know what I’m going to do about that wind hole. For now I’m sticking to a heading somewhere between rhumb line and great circle (yeah I know making choices is hard!). I am almost DDW but that seems the best course for me. Since I’m “slotcar’ing” now I’m not supposed to jibe. Thank you to Skip and Stan for their advice on the SSS web site.
Sometimes we’re sailing by the Lee so I’m on my tippy toes as we’ve had swell come from the South with gusts. I’m sure the jibe “preventer” protected this head at least a couple of times!
Thanks for reading my prose at sea. No room for philosophy yet, just work work work … Even sleeping is work here!