The bulk of the fleet has or will be hitting the halfway barge today, quite a busy place it will be, there could be a queue for the ice cream, wink.  Double Espresso seems to have grown his first to finish lead despite his kvetching about slow speeds followed at the moment by Passages (the nemesis O30) and Nightmare.  Crinan II and Riff Rider are holding their own along with Rainbow  and Fugu who appear to have crossed tacks in fairly close proximity of each other.  Perhaps they exchanged hello by wave or VHF.

Kyntanna has kicked some serious southing butt today, closing the gap a little bit with the comfort clump, some apparently setting off each others’ AIS alarms.  Morning Star continues the eastern defense.  He was closer to the finish for a time than Kyntanna,  saved now by the aforementioned butt kicking.  Both of them will likely be seeing the coming increase in wind before the rest of the fleet, so we could see the kicking continue.  By tomorrow the wind is forecast to do the kicking and we’ll see how our intrepids fare as they begin to enter or continue in the stiffening trades.  Boat parts that have been worked slatting around in lighter air will be in for a test.  Less than 800 miles to go for our faster boats. 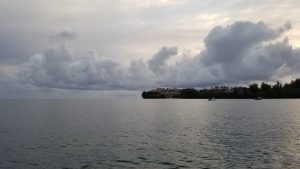