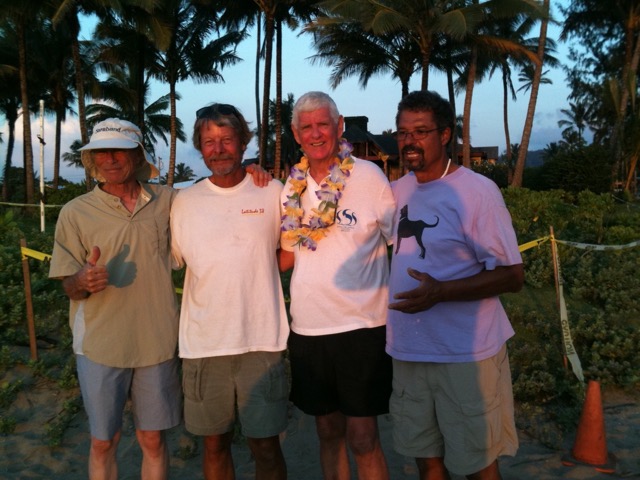 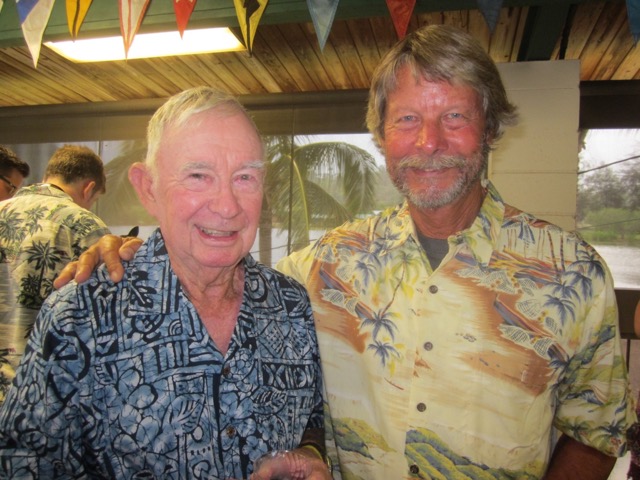 DolfinBill and the General at the SHTP awards dinner.

This is a recap to the race from the deck of Dolfin, better late than never. The Start – We’re out the Gate on the second (port) tack so that pre-race worry can be checked off. Want to get west ASAP but that plan is thwarted at Pt. Bonita where we’re becalmed for an hour. Many, many whales – we actually had to tack to avoid a long line of the spouting behemoths. Finally clear of the Farallons about 10pm and starting to move. The Windy Reach – Now we have wind and this is getting fun. Close reaching, then broad reaching in 20+ knots. Dolfin loves this stuff. Then the VHF is calling, it’s the Coast Guard inquiring if I know where Giant Slayer is because they got an EPIRB signal. I don’t know but soon a C-130 is circling overhead. This doesn’t look good but thankfully it turns out to be a false alarm and we all keep sailing. Spinnaker Problems – July 5th, we’re now broad reaching in relatively moderate wind (12-15kts) so time for the asymmetrical. It flies beautifully for all of five seconds until fluttering down from the masthead into the water. Not good and I’m thinking my only spinnaker halyard is now at the top of the mast. I haul in the sail from the water thanks to heavy bursts of adrenaline and realize I can retrieve the halyard because it’s attached to the ATN sock whose control lines are cleated to the deck. So now all that’s needed is to replace the exploded head ring. My first fix is spectra line knotted in a loop through the three webs at the head of the sail. I raise it again and after another five seconds it’s poof, deja vu all over again. Luckily the spinnaker doesn’t tangle in anything under the boat and I pull it in again. After inventorying all my spare parts I select a snap shackle that can be forced through the three webs and then snapped shut. After hack sawing off the swivel and filing the stump smooth I’m hoping the third time is the charm and raise the spinnaker once more. It works and we’re moving fast again after a few hours delay. Becalmed – July 6th, Spinnaker still up but wind is getting fluky and light. Definitely not as much fun as before. I’m chasing wind lines where ever they are but not catching many. July 7th, the noon to noon run is down to 96 miles. July 8th, 60 miles noon to noon. July 9th, 59 miles and I’m going crazy. Can’t help thinking of all the boats ahead who dodged this wind hole and are running away with the race. We finally start moving at 1:40pm, wing and wing. Hope that’s it for the light wind. Squalls – July 12th, Making good progress wing and wing the last few days but want to fall off to the south to get back on course so it’s up with the spinnaker again. Moving great except for the occasional squalls which make for more excitement than needed. At dawn I check forward and notice the lifelines on starboard are limp. That’s not good but I can’t figure it out until taking a closer look at the bow pulpit which appears to have been modified by spinnaker tack line under heavy load. So down with the spinny and up with the genoa while working to tension the lifelines somehow. July 14th, the spinnaker is back up when a stealth squall hits. By that I mean no visible clouds, just very sharp jolts of intense wind bursts, like someone snapping a whip. The sail and most of the rig is being pounded into the sea by the pulsing wind and I can only hold on to the horizontal deck waiting the something to break. I know that sail must come down but how to do it safely? Finally a lull and I’m deck, blowing the tack line to haul down the sock. But the sock is jammed and the colorful sail is flying above the top of the mast. Oops. I’m thinking of blowing the halyard next but am not happy with the prospect when just then the spinny flutters down where I can grab it and then let go the halyard. It’s in the water again but I’m able to get everything back on deck and down the hatch once again. I think that’s it for the spinnaker this trip. Roll Calls – Mike on Mouton Noir is great with our twice daily SSB roll calls. The only problem is there are only about six of us with SSB capability. It’s fun to get to know each other and follow our progress but it would be so much better if there was a way to follow all the boats. I think not knowing where you are relative to most of the others takes some of the fun out of the race but I don’t know the solution. I think less sailors these days use SSB and more are relying on satphones but that doesn’t allow for the group chats that are so special when alone at sea. It would be cool if we had access to the race tracker. The Finish – I think Dolfin is doing OK in the race and we are anxious to finally get to Hanalei Bay. At about noon (PDT) and 13 miles from the finish, I call the race committee and estimate two hours to finish. Can’t wait. But then the wind drops and finally dies altogether. I’m a mile from the finish, can see the boats in the bay and the surf crashing on the rocks only 100 yards away and yet Dolfin is facing backwards, completely in irons. Will I have to start the motor after 2120 miles and disqualify myself in order to save the boat with only a mile to go? Then yet another squall hits and we are finally pushed over the line at 3:40pm (PDT). Thank you, SSS Bill Meanley Dolfin